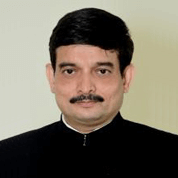 Mr. Aseem Kumar Gupta is an officer in the Indian Administration Service in 1994 and has previously served in important posts in various departments of the Government of Maharashtra.