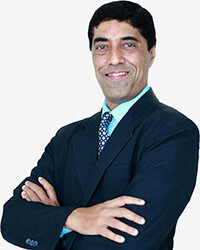 Neel is from a business background and when he joined MKCL he had 20 years of rich experience in his business.

Having successfully run his own business in the hospitality industry, he joined MKCLin May 2005. In the last more than 9 years of his association with MKCL, he has successfully completed various assignments that were entrusted on him in record time.

Having an entrepreneurial background, he could simultaneously handle multiple portfolios efficiently. His ability of being an effective communicator and a skillful organizer made him handle diverse nature of MKCL activities.He was entrusted with the Infrastructure program when he joined and his first project was completing MKCL's first own office in the ICC Trade Tower (which is now MKCL's Registered office). There were various contractors and multiple agencies which had to be dealt with.

The very fact that the construction of the building was in progress, carrying out the interior work was a challenge in itself. Overcoming all the obstacles the project got completed in a record time of 45 days. In the nine years of his heading the Infrastructure development program, he has successfully handled more than 40 projects of various sizes. The sizes and nature of the projects were of varying degrees. Projects ranged from completing sophisticated NAC center to sprawling offices having international look and feel. The projects handled also included making guesthouses, training centers and back offices for various projects.

MKCL started its international operations in the year 2007. MKCL was awarded its first international contract by one of the leading Universities of Saudi Arabia, King Saud University. A year later MKCL formed its first 100% subsidiary company- MKCL International FZE inSharjah. This year Neel was given charge of the International business initially to support the operations in Saudi Arabia. A Joint Venture Company was formed in Saudi Arabia in 2008 with the name MKCL Arabia and its office was opened in Riyadh. One of the major activity involved hiring best of the IT Trainers and place them in Saudi Universities.

Neel has been traveling across India to recruit the best talent from the country and place them in Saudi Arabia. More than 200 expert Trainers have been placed so far. The expert IT Trainers combined with the superior academic delivery model resulted in the increase in contracts from differentUniversities in Saudi and the number continues to grow.Other than MKCL Arabia, the other international joint venture companies that are currently operational are MKCL Lanka (In Srilanka) and MKCL Arabia, Egypt (in Egypt). In addition toSaudi Arabia, Egypt and Srilanka, Neel has also visited countries like Malaysia, Singapore,Indonesia, Ghana and Mali for expansion of business. MKCL's global presence will be soon seen in the Pan Asian and African countries based on the ongoing activities and different initiatives that are being taken.

His enterprising skills in combination with his dynamic leadership qualities, have benefitted MKCL in a big way in many of its national and international ventures.