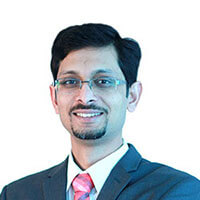 He is currently working as General Manager, Educational e-Governance and SuperCampus Business Development Program. In his capacity, he reports to Mr. Vivek Sawant, MD of MKCL.

He did his graduation in Production Engineering from Akola, Maharashtra in 1994 and MBA from Nashik, Maharashtra in 1997. He has also completed Diploma in Advance Computing from C-DAC in 2002. Mr. Sachin Satpute started his career as an apprentice engineer in MICO, Nashik for a year. He also served as a Lecturer at UMRER College of Engineering, near Nagpur for two academic years. He joined MKCL in March 2002 and with his sharp acumen and expertise in Enterprise Analysis, Domain Modelling, Business Process Reengineering, OOAD, Business Requirements Documentation, Business Presentations, etc., he played a key role of Sr. Business Analyst for various programs and projects at MKCL.

During his tenure, he has participated in many national and international conferences representing MKCL. Photography, cooking, swimming are the spaces of interest for him.