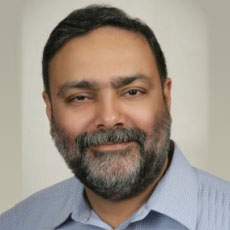 Varun Sahni is Professor in International Politics at Jawaharlal Nehru University, New Delhi. Before joining the JNU faculty in 1995, he was Junior Research Fellow in Politics and Junior Dean at Lincoln College, Oxford (1989-92); Resident Fellow of the Rajiv Gandhi Institute for Contemporary Studies, New Delhi (1993-94) and Reader in Latin American Politics at Goa University (1994-95). An Inlaks Scholar, Varun wrote his doctoral dissertation on the political role of the Argentine Navy at the University of Oxford (1991). He has served as the 10th Vice-Chancellor of the University of Jammu (2008-2012) and the 8th Vice-Chancellor of Goa University (2016-2021). For his "outstanding contribution to research and teaching", he was conferred the VKRV Rao Prize in Social Sciences (2006) by the Indian Council of Social Science Research.

Among his significant committee responsibilities in India, Professor Sahni has been Jury Member of the Jawaharlal Nehru Award for International Understanding, Chairman of the Programme Committee of the Indian Council of World Affairs (ICWA), New Delhi (2011-20), Member of the FIST Advisory Board of the Department of Science and Technology, Government of India (2009-16) and Member of the Executive Committee of Indian Pugwash Society (2003-06, 2012-18). He has also been a Member of the Academic Council/Planning Board/Committee of Direction of Central University of Jammu (2015-20), Islamic University of Science & Technology, Awantipora (2012-15), Baba Ghulam Shah Badshah University, Rajouri (2012-15), Tezpur University (2013-15) and Centre for Development Studies, Thiruvananthapuram (2015-18).

Professor Sahni researches and writes on nuclear deterrence issues, regional security, emerging balances in the Asia-Pacific, evolving security concepts, emerging powers, international relations theory, borders, Latin American issues and, most recently, river waters. He is also interested in understanding the impact of technology in education, having co-authored two key documents for TIFAC, the technology think-tank of Government of India: Technology Vision 2035 (2015) and Educational Technology Roadmap (2017). His 102 research articles and book chapters have been published in Current History, Contemporary South Asia, South African Journal of International Affairs, Relações Internacionais (Portugal) and Journal of Latin American Studies, amongst others. He has participated in over 220 academic conferences, 90 of them held outside India, as paper presenter, session chair, organiser or discussant.