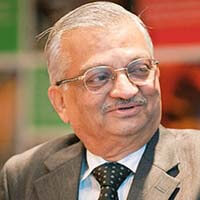 Dr. Anil Kakodkar (born on 11th November, 1943) joined the Bhabha Atomic Research Centre (BARC) in 1964, following the one year post graduate Training with top rank in Nuclear Science and Technology in the then Atomic Energy Establishment. He became the Director of BARC in the year 1996 and was the Chairman, Atomic Energy Commission and Secretary to the Government of India, Department of Atomic Energy, during the years 2000 -2009.He was DAE Homi Bhabha Chair Professor during January 2010 to January 2015 and INAE Satish Dhawan Chair of Engineering Eminence during January 2015 to January 2017. Currently he is AICTE Distinguished Chair Professor. Dr. Kakodkar obtained his BE (Mech. Engineering) degree from the Bombay University in 1963 and M.Sc. in the Experimental Stress Analysis from the Nottingham University in 1969.

Dr. Anil Kakodkar has worked for the development of the atomic energy programme in India throughout his professional life. Focus of his work has been on self-reliant development of nuclear reactor systems to address the Indian programme requirements. Dr. Kakodkar continues to be actively involved in programmes related to augmentation of Thorium utilization in our nuclear power programme and for development of non-fossil primary energy sources for meeting our overall energy needs.

Dr. Anil Kakodkar has been a key contributor to India’s strategic programme. He was amongst the chosen few involved in the first successful Peaceful Nuclear Explosion Experiment that India conducted on May 18, 1974 at Pokhran. And later, he played a key role in the series of successful Nuclear Tests conducted during May 1998, again at Pokhran. The comprehensive and robust programme under Dr. Kakodkar’s leadership has earned India a distinctive status as a country with advanced nuclear technology.

The deployment of technologies for better quality of life of our people has received considerable boost under Dr. Kakodkar’s leadership. Besides energy, these cover radiation processing of food and agro-products, agriculture with emphasis on oilseeds and pulses, healthcare particularly related to cancer, urban and rural waste management and desalination of water. Notable also are his innovative contributions to human resource development activities. Establishment of NISER (National Institute of Science Education and Research), DAE-Mumbai University CBS (Centre for Basic Sciences) and HBNI (Homi Bhabha National Institute) are expected to result in a fresh wave of human resource development, generating greater experimental capabilities and bringing in linkage between basic research and technology development for the acceleration of India’s multifaceted atomic energy programme. Other initiatives of Dr. Kakodkar include new centres for research at Visakhapatnam, Hyderabad, Kolkata and Bangalore.

Dr. Kakodkar has, over the years, built competent teams of highly specialized scientists and engineers in the reactor engineering programme. He has brought out more than 250 scientific papers and reports on various aspects of his work. He has Chaired several Committees, especially to give recommendations regarding education. Further, Technology Information Forecasting and Assessment Council (TIFAC) apex group led by him has brought out a Technology Vision 2035. The document was released by Hon’ble Prime Minister of India during the Science Congress on January 03, 2016.

Dr. Anil Kakodkar was Chairman, Solar Energy Corporation in its formative stage. He was also Chairman of Inter University Centre for Astronomy and Astrophysics (IUCAA) during 2006 -- 2012, Chairman, Governing Board, Inter University Accelerator Centre, New Delhi, and Chairman, Board of Governors of the Indian Institute of Technology, Bombay during 2006-2015.

Dr. Kakodkar presently devotes his time primarily on issues related to energy, education and societal development. He has been propagating the concept of CILLAGE, a knowledge based ecosystem for bridging city and village gaps for technology enabled sustainable development in rural areas.

Dr. Kakodkar has been honored by all three Padma awards and highest State awards from Maharashtra, Goa and Madhya Pradesh besides several national and international awards and honors.